Well, apart from the attempted scam that took 15 or 20 minutes, it really was a very magnificient day.  But truth be told, even the attempted scam was interesting -- and has given me additional entertainment finding several youtube videos showing the scam in practice (just search on Shanghai tea scam).  However, it's worth saying that in my case, the "friends" never said we were going for tea -- they just suggested we walk together through the "more authentic" streets ahead.

Nevertheless, allow me to blog about the rest of the day.  Since shopping ranks right up there with cleaning toilets on my priority list, and much of Shanghai -- and every other major city in the world -- is devoted to such conspicuous consumption -- I choose to ignore about 25% of every tour book -- including Lonely Planet.  However, I did exit the subway in order to be able to take in the humanity on one of the many major shopping districts - East Ninjing Road.  It was a wonderful "people-watching" stroll -- but the glitz and glamor on the global businesses there did not interest me at all.

This shopping district leads directly to People's Square and People's Park which were - except for the scam diversion - quite beautiful and serene with lots of older Chinese playing cards in large groups or practicing T'ai Chi.  Thereafter I headed towards the "not to be missed" waterfront "Bund" area.  Lonely Planet advises that the term originally referred to "an embankment of a muddy waterfront." Today "The Bund" is a beautifully maintained, expansive and elevated walkway on the "Old Town" side of the river that runs through the middle of Shanghai. It is lined with many historic mid-19th century hotels, banks and trading houses and provides spectacular views across the river to the high rises along the waterfront of the new area of Shanghai (Pudong).

On my way to The Bund, my stomach urged me to find something to eat.  So, when I noticed a street with several restaurants, I went in the first one 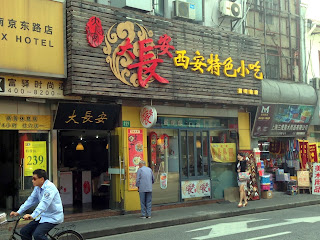 that had lots of people (all Chinese, of course) and was shown the only available seat, sharing a table with a middle age woman.  I intended to order by pointing to what she was having (which looked delicious and because the all-Chinese menu had few photos) but the waitress, who spoke some English, asked me if I would like to try their dumplings and soup.  I chose "cabbage dumplings" from those offered.

I sat uncomfortably silent across from this woman for a minute or so -- wondering if she was disappointed to having to share her table with me while I mustered the courage to ask: "Do you speak any English?"  Her response was "a little."  I then just thanked her for allowing me to sit at the table with her.  Her warm smile was followed with the very typical "where are you from?"  And so began another warm encounter -- challenged only because of her "little" amount of Engish -- and my "no" amount of Chinese.  I learned she was from the city of Xian (home of the Terracotta Warriors which I had visited on my last solo trip in China) and that I had happened upon a restaurant that specialized in Xian style cooking -- especially their dumplings.  In hindsight, I'm guessing the waitress must have assumed that the only white guy in the place must have specifically come in to have the well-regarded Xian dumplings. 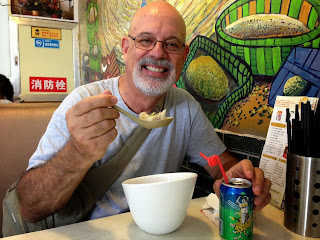 The dumplings and soup were delicious -- as was the feeling of success for having arranged yet another great meal and happened upon another fun encounter.  For the record, the dumplings/soup cost me the US equivalent of about $3.00 and a Sprite set me back another 82 cents (and no tipping in restaurants).  Have I said how much I like eating in China?  Part of it is certainly the wonderful food, but part of it is that the food is so affordable.

I then enjoyed a wonderful stroll along the supremely beautiful Bund -- on a perfectly beautiful day.  Took a few photos for normal Chinese tourists along the way, and got a few taken of me

After reaching the end of the walkway, I proceeded to take the "Bund Sightseeing Tunnel" underneath the river back to Pudong where I could get closer to very unique "Oriental Pearl Tower" 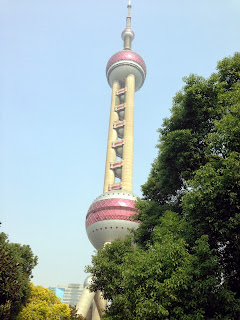 that is sort of like Seattle's Space Needle in making the city's skyline easily identified. 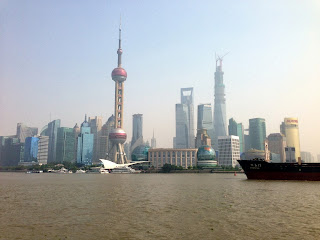 The "Bund Sightseeing Tunnel" is very accurately described in the Lonely Planet Guide: "The weirdest way to get to Pudong...through a tunnel of garish lights."  I feel confident youngsters would love it -- as did the Chinese tourists that I happened to ride with -- with more requests for photos!

I walked around the Pearl Tower and through the Financial District and yet another beautiful park (Lujiazui) enroute to the subway stop of the same name to get back to Andy's.

As prearranged, when Andy got home from work, we headed out into the night to yet another wonderful restaurant -- where the live chicken was brought to our table for approval enroute to the kitchen.  Another delicious and interesting meal -- with lots of great conversation. I've learned so much about Chinese culture and customs from Andy who was raised by peasant parents in a remote village -- including the meager living of peasants that has influenced Chinese custom of eating every part of the chicken -- including the feet and head.  I had tried -- and not liked -- chicken feet before at the school cafeteria where my daughter/son-in-law worked.  But tonight the chicken feet were plenty tasty -- and I even bit into the chicken's comb which was very fatty in texture and taste. 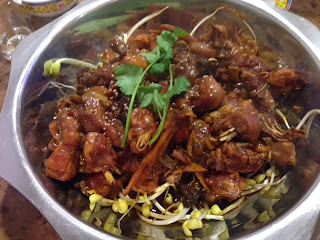 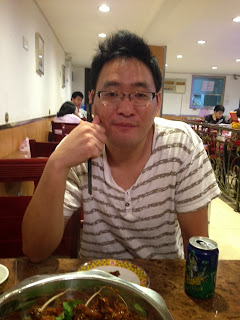 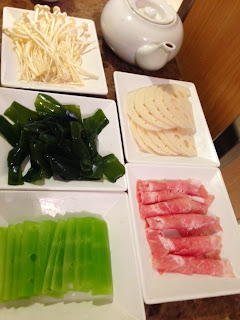 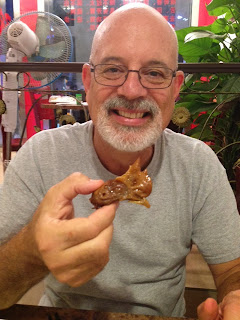 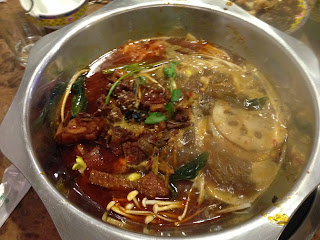 All in all, another very satisfying day.
Posted by Noel at 2:13 AM