October 14 - A Sense of Accomplishment

When I started this trip, I had a general plan to get to Beijing to visit a brass instrument factory that produced a tuba that I purchased a couple of years ago.  I had gotten to know the company president when I purchased the tuba at one of the trade shows held in Anaheim.  Well, when I planned the trip I didn't know that I would be invited by Andy's girlfriend to visit her hometown of Wenzhou and that visit would actually happen (now scheduled for this coming weekend).  The chance to get to know another family in China certainly trumped my interest in seeing the manufacturing plant (like I had in Germany)-- so last night I decided to cancel plans to travel to Beijing (a 5 hour high speed train ride and $100 each way from Shanghai) which had been in my plans for this week.  Instead, I decided to make an overnight trip to the 4th largest city in China (pop 8.7 million) and reputed to be among the most beautiful earning it this slogan: "In paradise there is a heaven, on earth there is Hangzhou."

With Andy's help, we determined that the 55 minute high speed train cost about $12.50 USD and I arranged a hostel there using the well-regarded Hostelworld.com web site.  Andy suggested that I might want to try to connect with his girlfriend's brother, Hongwei, who is a student at a Hangzhou university. This possibility led to various personal and logistical considerations:  did he want to meet me; did he have time free from his schooling; how and where would we connect.  Using the most common messaging program in China (WeChat), Andy was able to create the necessary arrangements while I added the WeChat program to my iPhone and created an account.  Shortly, I was in direct communication with Hongwei.  Hongwei expressed a lack of confidence in his ability with spoken English -- but had the day off and was willing to "host" me.

So, this morning I headed out early to catch the subway to Shanghai's Hongqiao Train Station.  A new adventure!

Now,  please allow me to give a detailed description of the next few minutes. Anyone who has traveled in China will recognize and laugh along with the challenges I describe -- the rest of you will learn part of the reason I enjoy visiting China:  every little accomplishment, no matter how insignificant -- from finding a toilet, to filling your belly, to getting to your destination -- comes with such intense satisfaction.  Anyway, here's the story:

Getting to the train station was easy and initially I thought getting the ticket and on the train would be easy because the station was modern and signage included English.  The easy part ended when I saw lines of Chinese both at machines and at the counter waiting to purchase tickets.  I waited for a machine hoping it would have an English button like I had experienced on my solo trip to Xian on my last trip -- and was pleased that it did.  Quickly I punched in my destination, determined which train I wanted and touched "purchase." The programmers must have decided to stop with the English at that point as I was unable to figure out how to actually accomplish the purchase without some pre-exisiting "train card." It wouldn't take my money or credit card and I was left with cancelling the transaction and waiting in another line which was about 20 people deep.

As I waited my turn, I tore pages from the Lonely Planet book and began underlining and circling what I needed in the event that the ticket representative spoke no English.  It was a good thing I was prepared because she seemed to not understand any English. 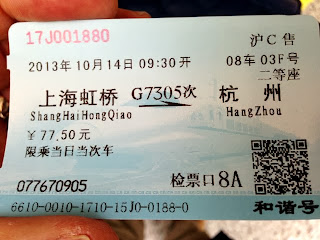 I was happy to get my ticket but then realized that I had no idea where the train gates were as I rushed around in the massive building -- trying to follow others who hurried about. 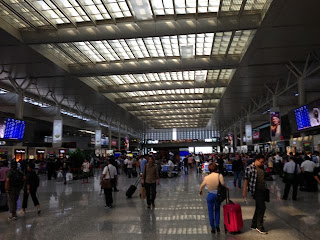 When I thought there was no additional place to look, I stopped one gentlemen and tried to point to my ticket and shrug my shoulders along with my words.  He looked very puzzled, pulled out his iPhone and pulled up the calendar and pointed to today's date.  I quickly realized that I hadn't been pointing to the gate number but the date on the ticket -- and he probably thought I was asking what the date was.  It would have been a humorous moment except I felt the time ticking away to find the platform or miss my train and have to purchase yet another ticket. When I then pointed to the gate/platform, he just shrugged his shoulders.  Things weren't going well.

I then stopped a middle aged woman -- and she just pointed to the other end of the massive building -- so off I went in that direction hoping I'd see something along the way.  Within 30 seconds or so, the woman was running to catch up with me -- and while speaking only Chinese, made motions that it was clear I should follow her.  I'm guessing she had only belatedly realized that I really didn't know what I was doing when she had directed me to the other end of the station.

It turns out that all the boarding gates -- that lead to the platforms -- are on the upper level of the station -- and she was leading me to the escalators that led to the entrance to the departure hall.  It was also gigantic.  I thanked her several times with my slaughtered "xiexie" thank you which she may not have understood from my Chinese but probably did from my body language.  She smiled.  Once again, as has happened frequently, someone here helped me out when I needed it.

Getting on the train and finding my seat was a breeze -- and as I got comfortable in my chair, that fun sense of accomplishment swept over me.

The challenges returned as soon as I exited the train into Hangzhou's massive train station -- this one very old and with little English signage.  I had arranged to meet Hongwei at the hostel and he had texted me Chinese characters to give to a cab driver -- but I got lost following a down arrow for a "Taxi" and had to retrace my steps back into the main hall with thousands of people rushing about.

Realizing that the signs were only going to lead me to where I had been, I asked a couple people and they just pointed in the direction I had already been.  And, as I walked, several men approached me asking if I wanted a taxi.  Fearing the Lonely Planet taxi scam warnings, I was set on finding the taxi queue myself -- however thankfully when one young person approached me -- for some unknown reason I didn't waive him off as I had done others.  I stopped long enough for him to explain that he was Hongwei.  He had decided on his own that I might get lost and decided to find me at the train station.  He would have been impossible for me to pick him out in the station -- but a 6'1" bald white guy with a white goatee was easy for him to find.

My stress for the day was over -- I now was going to spend the rest of the day with a new friend.
Posted by Noel at 5:29 AM